There’s no getting away from the fact that we can’t help children and their families without charitable donations. Many amazing people organise a wide range of events every year or join in with some already arranged and choose us as their charity. 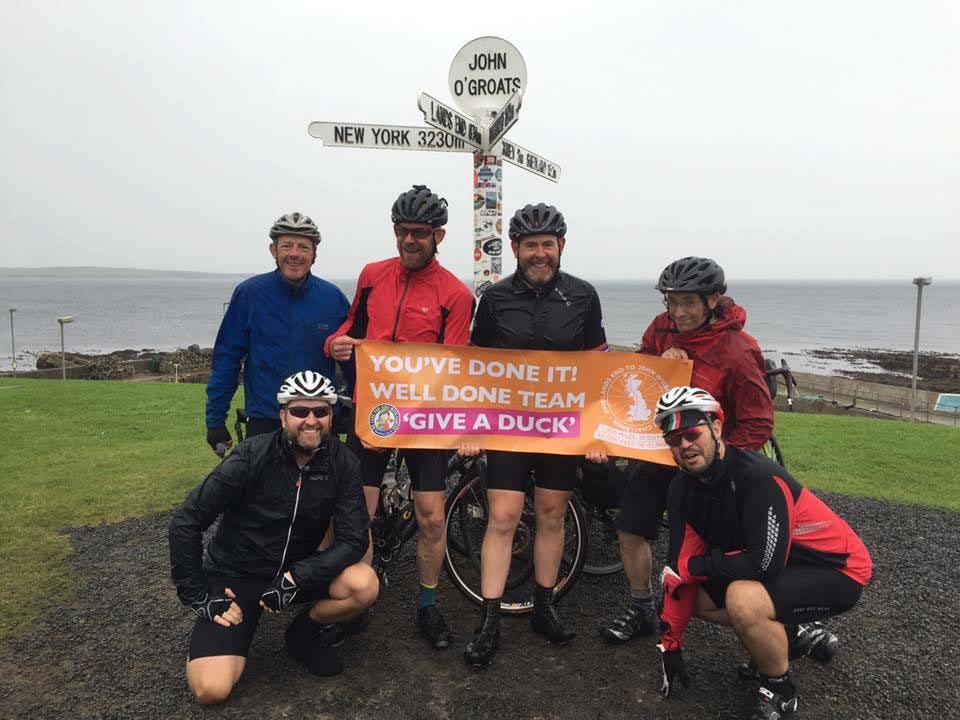 When six friends from York decided to celebrate a 50th birthday with a Lands End to John O’Groats bike ride, they envisaged doing it just for the fun (if you can call it that!)

But the more they told people about the idea, the more sponsorship money they were offered – despite not having set up the event as a fundraiser.

Gareth Williams, one of the intrepid six, explains: “It was Piers’ 50th birthday and we were all keen cyclists. Piers owns Cycle Heaven in York so it’s no surprise we decided to do a mega bike ride to celebrate his birthday.

“We planned to ride the 1,118 miles from Lands End to John O’Groats unsupported in 10 days. But when we talked it about it people kept offering us sponsorship money, and it soon became apparent we could turn this celebration into a fundraiser and do some good for charity too.

“Andrew from Give A Duck is a good friend, so it was an easy decision to donate the money to such an amazing cause.”

from their trip, which saw them climb 52,500ft, the equivalent of going up Mount Everest twice or Mount Killimanjaro three times over the 10 days and ride an average of more than 100 miles every day. Doing the trip unsupported meant the men carried everything they needed in rucksacks. Apparently they’re all now fabulous at packing for weekends away!

The money was raised by a combination of corporate donations from employers and money from friends and family.

Gareth has done a few things for charity over the past 10 years and is taking part in our Swim The Channel challenge in August (2019). Completing the swim will mean Gareth has done his very own charity triathlon, doing the Great North Run for Candlelighters, and the bike ride and swim for Give A Duck. What a hero!

Why raise money for us?

Having cancer is a scary thing. And it’s even worse when you’re a child who perhaps isn’t old enough to understand everything that’s happening to you.

Give A Duck works with play leaders, nursing staff and families with children at Principal Treatment Centres and other hospitals in the UK to help make things a little less scary. Gabe’s Chemo Duck Program was developed in the US by specialists to alleviate anxiety and create huggable hope.

Read more about the Give A Duck education programme and the pack children are given here.

If you have another idea about how to raise money, drop us an e-mail info@giveaduck.org.uk.

Our Chemo Duck mascot sometimes drops in to fundraising events, so let us know if you’d like him to come along to your event!